“Peter’s performance was truly a thrill… After he left we just kept saying, ‘How did he do that!?’  What Peter presents isn’t a just magic show, it’s truly a magical experience.”
Nora Reilly Palmer, The Coyle Company

Your holiday party is important because it’s your company’s chance to say a sincere “Thank You” and “Good Job.” Holiday Party Magician Peter Gross is just that ingredient.

Hire a holiday party magician like Peter for your special event to make it memorable and unique.  Bringing Comedy Magician Peter Gross to your event guarantees a show that stars your people, sharing the stage and the glory of a fun and funny show. 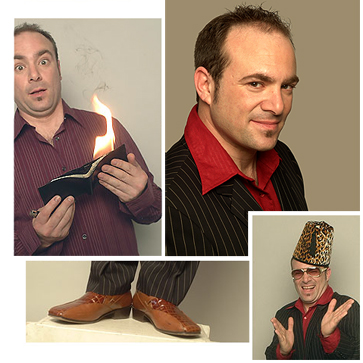 Peter’s Close Up Magic is appropriate for:

Peter Gross has over 25 years of experience performing magic and comedy around the world.  He has been seen on TV, at comedy festivals, and in theaters, but he still does a majority of shows for corporate audiences and associations.

Peter’s interest in magic and experience in audience management led him to study Neuro-Linguistic Programming and hypnosis.  He now performs as a magician, mentalist and stage hypnotist in at least three different full evening shows.

Peter’s  award winning comedy and magic show has been seen in theaters, comedy clubs and on festival stages across the world. He’s been invited to the White House, performed at the Kennedy Center, Canada’s National Theater and has made numerous TV appearances. He has been invited to perform in Germany, Spain, Scotland, and Japan. He also won two silver medals at the Oranjeboom International Variety Performer’s Competition in Rotterdam, Holland.